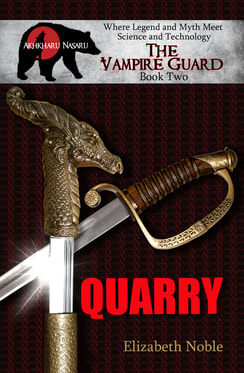 Blurb:
Four members of The Vampire Guard—Forge, Blair, Declan, and Lucas—face a dangerous and elusive enemy. And this time, it’s personal.


When massive tech outages impact everything from Wi-Fi to traffic control, Blair, Forge, Declan, and Lucas think it’s a simple matter of catching troublesome hackers. But they quickly realize far more is at stake.


Millions of dollars in art are the target of a thief who’s not afraid to kill---and he’s no stranger. Not only has he escaped capture, twice, a decade ago, but he’s had a hand in life-altering tragedies throughout their lifetimes.


Once it becomes clear that art theft is just a fraction of his plan for mass destruction, they realize time is running out. The clock’s ticking. Catastrophe is imminent. Can they find and disarm all the bombs in time or will countless lives be lost?
universal book link

Kimmer's Erotic Book Blog: Julie gives 4 stars and says: I must say, I am in love with how in love Jonas and Blair and Declan and Lucas are! In fact I may just be a little in love with Elizabeth Noble herself for bringing these characters to life for me. I would like to have each of these men as my real life friends! Read the review.
Man2Mantastic: E. Lo gives 4 stars and says: I am a tech geek and boy does this book really bring out the geek in me. Blair, the tech wiz really gets to let his talents shine in this book. Without his knowledge, I don't think they would have been able to get this case solved. Read the review.
Divine Magazine: Debbie Attenborough gives 4.5 stars and says: This book is also much more active. There is more action, more fighting, more running around chasing the bad guy. More of the Vampire Guard are here too. Two more teams, of four people in each but I can't remember all their names! I'd love to get more about them, though. I'm left wanting to know more about those pairings and how they came about. Read the review.
Scattered Thoughts and Rogue Words: Alisa gives 4 stars and says: This book kept moving with another twist just around the corner to keep the reader’s interest. Read the review.
Queer Scifi: Ben Brock says: This was a complete comfort read for me. I’m not going to lie, I cozied up with this book and a cup of hot cocoa. Read the review.
Diverse Reader: Meredith says: This book had a lot of twists and turns that really kept the story hopping. Of course, entwined with all of that are the four guys: Forge, Declan, Blair, and Lucas. They really are a great ensemble. Read the review.
Love Bytes: Roberta gives 4 stars and says: I wanted to see if Elizabeth could top what she had done in the first book and she came out Swinging!!  This book had me going from the first words until I finished the story. This book had it all, mystery, suspense, action, shifters, vampires and just a dash of romance.  It was such a great combination…that I kinda didn’t want the story to end. Read the review.
Thorns and Ink: Rayne says: Ms. Noble, swings right into the fun, and again she has me page after page in this gripping story. I like the spin that this takes. Mysteries from the past, a little cold case action, and of course a sword fight. Read the review.
MM Good Books Reviews: Shorty gives 5 stars and says: ​I was stunned speechless by how well written, intriguing and thoroughly captivating this addition was. The characters were all engaging, determined and hell-bent on finding the man responsible for so much mayhem. The investigation itself and how Blair, Jonas, Declan and Lucas discovered who was behind the acts was mind blowing. Read the review.
The Novel Approach: Taz gives 4 stars and says: Elizabeth Noble’s writing style iss easy and natural, pleasant and not overdone. Humor and technical details also reveal that the author has a skillful way of breathing life into her characters, making them full and vibrant. Read the review.
I've been fortunate to have wonderful reader reviews. A huge thank you to all of you! Read what the readers say on Goodreads and Amazon.
Excerpt:

Blair saw Declan crouching low in the shadows. Lucas described the differences between Declan and Forge perfectly. Forge would come at an opponent head on. Declan was, in Lucas’s words, the deadly assassin of the night. He’d disarm and disable an adversary before they ever knew he was there and he had a spectacular repertoire of means to accomplish those ends.

Blair almost felt sorry for anyone approaching and threatening him. Almost.

The human they’d chased moved cautiously out of the elevator space. He looked one way then the other as walked in Blair’s direction. Blair reminded himself he’d been human a few short years ago.

Reaching behind his back, the man pulled a gun out and held it in front of him in what Blair now recognized as an assault position. Coming to a stop opposite Blair the man used one foot to shove against the chunk of concrete. Blair shivered and looked up at the man. He gulped in a breath and gagged.

The man smirked. “Where’s your buddy and why were you chasing me?”

“I’m bleeding,” Blair whispered. The gun discharged and a bullet ricocheted off the cement sending a spray of dust and stone slivers into the air. Blair flinched away then hissed in a breath and stifled a sob. “Help me. Please?”

“How the hell did you even survive that fall?” The man’s eyes narrowed and he raised the gun, taking aim at Blair’s head. “Tell me where the other guy is and I’ll make it fast.” He moved a few feet to the side and glared at Blair. “What were you two chasing me for? And why were you in that building?”

“Why were you in the…?” Blair cringed and his voice cracked and broke. He heard Declan moving into position behind the man. “He left me. The b-bastard. W-we were there to….” Blair sucked in a succession breaths then tilted to the side as much as possible and groaned out one long sigh then slumped down.

The man’s heartbeat ramped higher. “Hey, no, tell me what you—” he garbled some odd noise when his words were cut off.

Blair opened his eyes and turned his head to watch. One minute no one was behind the man and the next Declan had one arm around his chest, holding him in place. His other hand held the man’s chin.

“Drop it,” Declan snarled. The man struggled and Declan gave him a small jerk. “I was sixteen the first time I killed a man with my bare hands. You’re responsible for my young friend here being hurt. Drop. It.”

The man sucked in a breath but his fingers opened and the gun fell to the ground.

“I will kill you. You have the choice of it being quick and painless, here one minute, not here the next. Or,” Declan moved his hand and pressed against the man’s neck. “Feel where my thumb is pressing in. Enough pressure there will sever your spinal cord.”

Blair watched as Declan tightened the arm he had around the man’s ribcage and jerked up with enough force his feet were off the ground for a few seconds. The guy’s face turned red and he gulped in breaths.

“Getting hard to breathe? I’m a vampire. That makes me strong enough to crush your ribcage and snap your neck.”

Declan’s eyes changed to a solid moss green and his fangs dropped. He turned the man’s head far enough to see him. “Whether or not you believe in our existence is irrelevant. Who are you working for?”

The man spit at Declan.

Heaving a long suffering sigh Declan said, “Hollywood makes it look so smooth. One twist of his neck,” he gave the man’s chin a jerk. “And the bad guy just falls dead. No pain, no fuss, no muss, no real knowledge of what happened to you. Just dead. In reality you’d lay there, conscious, unable to move and fully cognizant of the fact you’re suffocating.” He shook his head ever so slightly. “That must be horrible, knowing your lungs aren’t working and being unable to draw a breath. Yet your mind knows what’s happening.” Declan ripped at the guy’s shirt with his fangs. “But one bite in the right spot and you’ll bleed out so fast you’ll never suffer, never know.”

“I’m not telling you anything,” the man ground out.

Blair saw the muscles in Declan’s arm tense and he thought he heard ribs cracking.

“It would be a shame if one if your lungs were punctured. Air in your chest cavity is a horrible feeling.” Declan moved so he was speaking into the man’s other ear. “If you’re going to continue in this line of work you really should learn more about human anatomy.” He shrugged. “A little tip.” He relaxed his grip on the man’s chest. “Now, answer my questions.”

“I-I w-was only supposed to verify the Wi-Fi was out in the building and a private network would still be operational.”
“Who was screwing with the traffic signals?” Blair asked.

When the man glared and kept silent, refusing to answer Blair’s question Declan must have pressed harder with his thumb against his neck because he spit out a funny hiccup sort of sound. “Answer him,” Declan snarled.

“My job was to come here and meet up with another man. I only had one name, Black. He was testing things here and I tested the lights.”

Declan met Blair’s gaze and seemed as if he was waiting for Blair to ask another question. Instead Blair shivered and rubbed his eyes. His vision wavered for a few seconds and the sound of Declan’s heartrate changing made him concentrate harder.

“Test for what?” Declan asked and raised his eyebrows. Blair nodded once confirming that was a good choice of questions. The man shook his head and Declan tightened his grip around his chest. Blair heard the guy try to suck in a breath and his heartrate shot up while he squeezed his eyes shut.

“I don’t know. I’m telling the truth, that’s all I know,” the man’s words were pushed out with an effort and his voice had a breathless quality to it. “Black told me what part of this building to avoid and to meet him in a bar, Hooley’s, a few blocks from here by midnight.” His voice cracked and he uttered a wet, sobbing sort of sound. “Please. That’s all I know.”
​
Declan drew a deep breath and sighed it out slowly. Blair watched as Declan tensed and shifted his weight again.

“No, no… I told you everything—” The guy was crying and the more he struggled the less he could move.

Declan dipped his head and bit down on the man’s shoulder causing even more screaming and begging. In a movement only Blair could see it was so fast, Declan let go of the man long enough to spin him around. One quick step to the side then back and Declan cranked back his arm, punching the man’s head. Blair winced as the guy dropped like a stone, out cold.

Shaking his head Declan pulled the denim jacket and hoodie off the guy. “That was almost embarrassing,” he said to the unconscious man. Next he removed the button down shirt the man wore, leaving his undershirt alone. Declan used his fangs to shred the lightweight cotton shirt. That made Blair smile. Forge used his fangs to open beer bottles and packages all the time. This was the first time he’d seen Declan do such a thing. Using the strips of material Declan tied the man and gagged him then scooped him up and carried him farther away leaving him where they could still keep an eye on him.
Copyright 2021