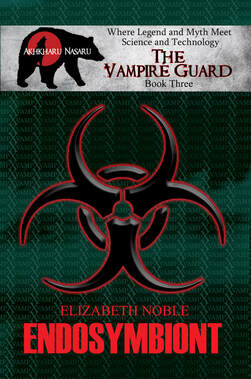 ​A werewolf and seven vampires are all that stand between the world and complete annihilation.

Then a train blew up.

Tracking an organism deadly to not only humans, but vampires and werewolves alike, brings Kai and Ori into the Vampire Guard. Decades later, they, along with Operative Team Jack Rabbit, come face to face with the horrors that same virus produces. Dead bodies are coming back to life, and rational people are becoming violent and brutal killers.

A massacre is taking place nearly a mile under the Atlantic Ocean. Two teams of The Vampire Guard are in the thick of it, fighting to survive.

Lucas nodded. “Another desirable quality for a super soldier. Mental and emotional stability. There’s also the possibility he was hoping to create more than one generation of super soldiers by incorporating werewolves. I’m starting to think this guy had a clear idea of what he wanted, but not how to achieve it.”

“And then somewhere along the way in his quest to create some sort of super soldier, Sauer discovers an organism that can be weaponized,” Jonas said.

“There’s a gap in the research. A jump from analyzing the three species to what we’re dealing with now,” Lucas said. “I’m guessing the biological weapon is still a fairly new idea. Eighty years ago there simply wasn’t the technology to make this thing useful. However, as a group, scientists are hoarders and packrats. We never really throw anything away.”
​
“And once an idea is out there, it never goes away,” Jonas added and grinned.